Marine Wildlife Research in the Gulf of Maine

Studies on the marine wildlife that live and feed in the Gulf of Maine have provided insights into this unique and complex ecosystem. Some marine organisms, like phytoplankton and zooplankton, are small and often microscopic in size, yet they are found in abundance as they drift passively with the water currents. Zooplankton are food for other organisms, including the Northern right whale, a baleen whale that is typically 50 feet long and weighs close to 70 tons. The North Atlantic right whale is considered to be the most endangered marine animal that feeds off New England.

Some species of marine wildlife spend their entire lives in productive coastal waters, while others migrate into the Gulf of Maine to feed on a seasonal basis. Regardless of their size, abundance or residency, each species is an important member of this ecological community that is part of a diverse and often fragile marine ecosystem. Bathymetric chart of the Gulf of Maine.

Studying wild populations of marine wildlife at sea is difficult and challenging, but recent advances in technology represent an important tool supporting these research efforts. As in the past, research conducted aboard vessels at sea is costly and time-consuming and the amount of data collected is often dependent upon weather conditions offshore and the ability to locate the subject animal. Today, remote-sensing devices deployed in the atmosphere and in the water column are helping scientists collect data in a cost-saving and time efficient manner. Information collected by satellites orbiting the earth or acoustic buoys anchored close to the ocean floor is sent directly to researchers in their laboratories for future data management and analysis. Combining these new technologies with tried and true techniques, like long-term sighting studies that incorporate photo-identification techniques, have allowed scientists to better understand the biology and ecology of many marine organisms and their interactions in the marine environment.

Starting in the mid 1970's, biologists and scientists joined forces with commercial whale watching companies operating in the coastal waters of the Gulf of Maine. This arrangement provided researchers an affordable platform that gave them consistent access to wild populations of whales and other marine animals sighted offshore over the course of the trip. Researchers, acting as the onboard naturalist, were able to collect specific sighting information and photographic images on the animals that they observed.

In turn, these trained professionals provided educational programs to the paying passengers present aboard the boat. This partnership between the business and research communities continues today and forms the basis of valuable long-term studies on coastal marine wildlife.

Long-term studies based upon benign research techniques have allowed scientists to learn more about the biology and ecology of the great whales and other marine wildlife that live and feed in the waters of the Gulf of Maine. One species of focus has been the humpback whale, a medium-sized baleen whale that is considered endangered worldwide. Humpbacks migrate north each season to feed in the productive coastal waters of the Gulf of Maine. For over 3 decades, sighting information and photographic images have been collected on individual humpback whales that can be identified using photo-identification techniques. This has allowed the western North Atlantic humpback whale population to be the most well studied and understood population of large baleen whale in the world.

Individual humpback whales can be identified over the course of a season or from one season to the next using benign photo-identification techniques. Individual whales are Salt, the humpback whale. cataloged based on natural body markings and pigmentation patterns unique to each animal. Since many humpbacks return to the same feeding grounds each season, some individuals are followed over the course of their lifetime. The most famous and photographed humpback whale, Salt, is an adult female that has been observed feeding in the Gulf of Maine each year since 1976. By documenting her presence offshore, recording the behaviors she exhibits, and noting which years she produces an offspring, researchers are now learning about the biology and life history of this endangered and highly evolved marine mammal.

Since 2015, Salt has returned with 13 separate calves. Humpback calves stay with their mothers for close to a year, and then are on their own. Most will return to the feeding areas of their youth, so we often see many of Salt's previous offspring return to feed off Cape Cod each spring, summer, and fall. 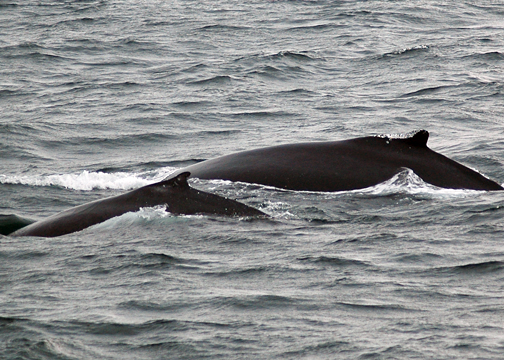 Two of Salt's calves, Thalassa and Mostaza, have returned with calves of their own. This means that Salt is now a grandmother of 12 humpback whales. In 2014, Salt's grand-daughter, Etch-a-Sketch, returned with her first grandchild and this makes Salt a great grandmother of 1. Following Salt and her growing family is helping us better understand the life of the humpback whale and the world that they live in.

New technologies are adding to long-term studies by helping scientists better understand their day-to-day activities and their interactions with the marine environment. Acoustic tags that have many of the same sensors as air bags are being attached by suction cups to the back of large whales and provide a detailed view of the orientation and movements of the animal as it moves through the water column. Similar tags are also being attached to large coastal pelagic sharks, like great white and basking sharks, to learn more about their movements over the course of the year. Acoustic sensors are anchored at the ocean floor and record sounds of ships and whales. These underwater detectors allow researchers to better understand the seasonal movements of many different types of animals offshore as well as evaluate the impact from human activities, including commercial vessel traffic, fishing activities, offshore fuel facilities and offshore dumping facilities. 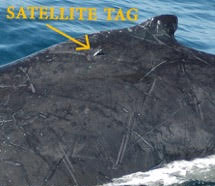 New research technologies based on remote-sensing of the marine environment and long-term tracking of individual animals provides new opportunities in the marine sciences. These tools are helping scientists better understand the complex and often hidden secrets of marine wildlife in the world’s oceans.

NECWA offers a Marine Wildlife Internship Program for students with a variety of interests. Students work with staff of NECWA to study various aspects of the unique coastal wildlife in the Gulf of Maine. Aboard Plymouth Whale Watching, a commercial whale-watching company out of Plymouth, A close approach by an ocean sunfish. Interns collect sighting data and photographic images of local marine wildlife sighted offshore. This information is analyzed and shared with other interested government and non-government groups too increase our understanding of local marine wildlife. Internships also provide meaningful opportunities and real-life experiences for undergraduates in their chosen field of study.

Data and photographs collected by BSU interns are used in various research projects and support educational outreach within the New England community. As our knowledge base and awareness of basking sharks, ocean sunfish, finback whales, humpback whales and other marine species increases, we develop a greater appreciation for these animals and the other unique wildlife that can be found off our New England shores.

Since our mission includes both educational and research efforts, we have formed many collaborations in the region including those with the Massachusetts Division of Marine Fisheries, the National Oceanic and Atmospheric Administration (NOAA), and Bridgewater State University (BSU). These connections stimulate the exchange of scientific information and support conservation efforts by allowing participation of many and varied government and non-government organizations, as well as individuals, in our mission.