Turtles are reptiles that live and feed in all types of habitats, including wooded forests and fields as well as ponds, salt marshes and open oceans. Regardless of where they are found, all turtles are tied to the land for when it is time to nest, females must lay their eggs on land.

There are 11 different species of turtles that live and nest in Massachusetts. Sea turtles are annual visitors to our offshore waters each summer and fall, but they nest and spend their winters in southern, more tropical areas. Of the 11 species that do nest in Massachusetts, only 1 is not native to the State.

This page has many resources for you to use and one includes how to safely move turtles across roads. We all need to help these animals survive for they are amazing, deserving in their own right and are our backyard neighbors.

Species native to Massachusetts are the: 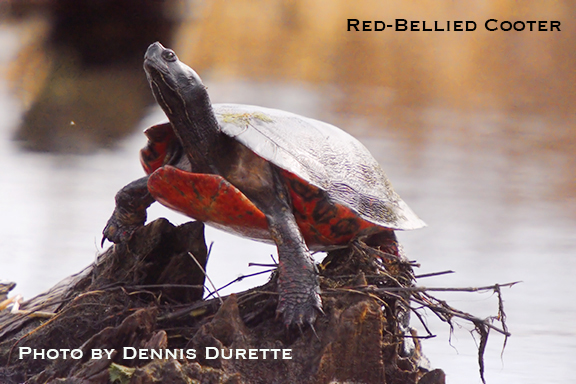 The Red-earred Slider is the only non-native species and in 2014, it became illegal in Massachusetts to own or sell this animal due to the possible spread of salmonella, as well as other health concerns and environmental issues.

The 6 species of turtle that are listed under the Massachusetts Endangered Species Act (MESA) are the:

NECWA is putting together a guide that reviews the different turtles that can be found in Massachusetts. We are putting the finishing touches on this guide so please check back.

All of the species listed above are aquatic except for the Eastern Box Turtle which spends the majority of its life on land. However, even this land-loving species inhabits many types of habitats, including woodlands and fields as well as along the edges of marshes, bogs and streams. The Eastern Box Turtle is also the only turtle that can close itself completely within its shell if it senses danger. This comes in handy when one encounters a predator like a fox or coyote, but it doesn't help when crossing a road and trying to dodge vehicles. 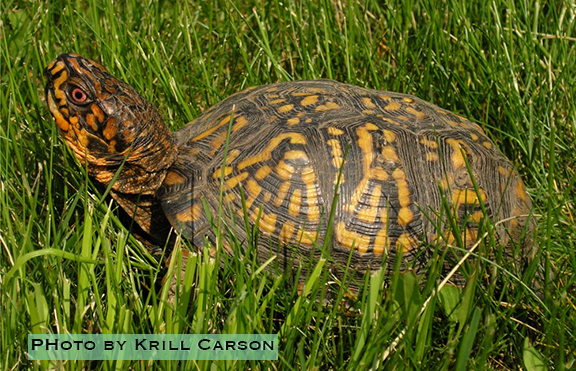 Click on the link below to report your sighting of a Box Turtle. We are looking for sightings of both live and dead Box Turtles. If you find an injured Box Turtle in southeastern MA, please call our rescue hotline number at 508-566-0009. 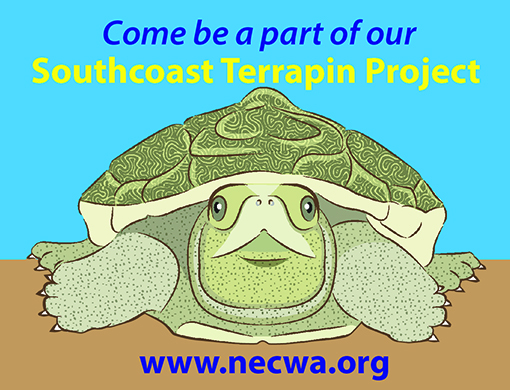 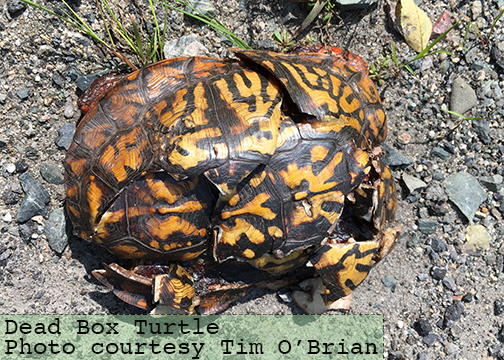 Threats to Turtles in Massachusetts

There are many threats to all types of turtles, aquatic or terrestrial, and all impact their population health and wellbeing. The number one threat is habitat loss, including habitat fragmentation and degradation. Turtles need a varied habitat to survive. Often the location of where a turtle feeds is not where it brummates or spends time in the winter. Areas where females lay their eggs could be vastly different from where those same females feed and rest. Additional threats to turtles include their collection as pets, increased disease due to pollutants, predation of adults and hatchlings as well as injuries and deaths on busy roads.


How to Report Your Turtle Sighting

NECWA has a Southcoast Terrapin Project where we ask people in the community to report their sightings (dead or alive) of Diamondback Terrapins in the coastal areas of southern Massachusetts. The State of Massachusetts would also like to receive reports of terrapins as they are listed under the Massachusetts Endangered Species Act (MESA). Reporting your sightings as part of citizen science programs is a fun way to make a difference. This information is helping biologists, scientists and managers better understand the biology and life history of those species listed as Endangered, Threatened or as a Species of Special Concern. The information you provide will help managers better protect important turtle habitats in Massachusetts to ensure the continued survival of all species in our state. Below are links to report your sightings.


What To Do If You See A Turtle Crossing The Road

Remember that old joke "Why did the chicken cross the road?" Well, that line might be a cliche, but it does ring true for turtles. Many turtles cross roads in order to access different areas within their habitat and many adult females move great distances in order to access suitable nesting areas. 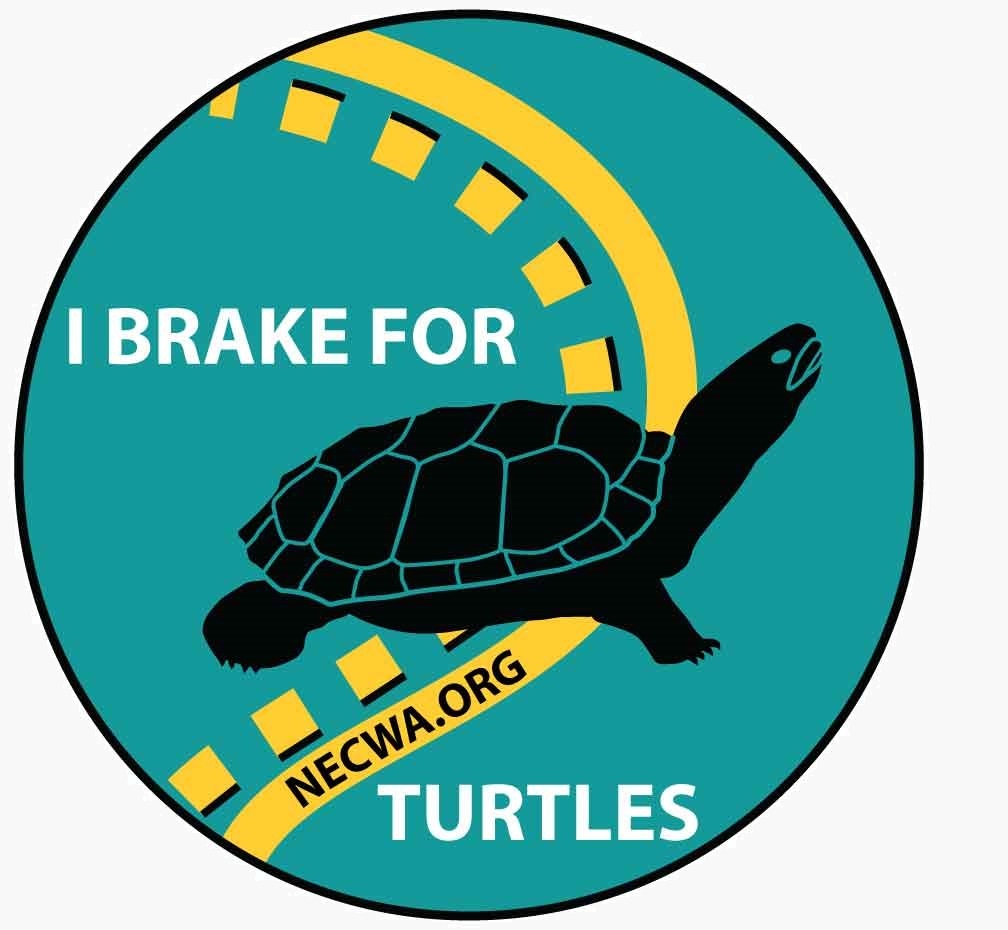 This makes turtles most active and therefore, most visible, between the months of April through October. In the spring, female turtles leave their home sites in search of suitable nesting areas, often sandy soils with good drainage. Once they have nested, females must turn around and make the long journey back home. When their eggs hatch in the late summer to early fall, the baby turtles or hatchlings must also head back to what will now be their forever home, whether that home is a pond, a lake, a wooded forest or a coastal marsh. Environmental changes caused by human actions often force adults and hatchlings to travel further than normal and to deal with unexpected obstructions and hazards. 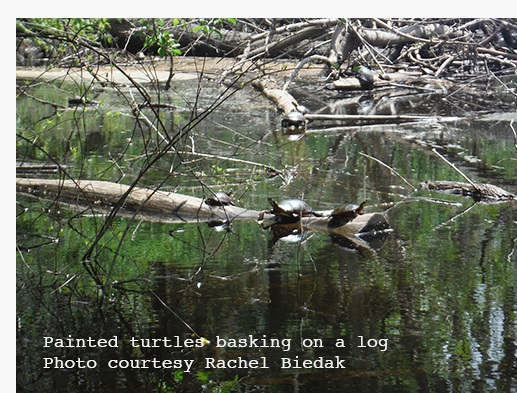 So what do you do if you see a turtle by the side of the road or in the road? If the situation is safe for you, you can stop and help it across. Always move the turtle across the road in the direction that it was heading. When picking up a turtle, never lift it up by its tail for you can injure or dislocate its backbone. Be careful when handling a turtle for they do not understand that you are only trying to help them. Turtles have strong jaws and they will use them if they feel threatened or in any type of danger, and you can't blame them! When you get the turtle to the other side of the road, place the animal as far away from the road's edge as you can. To learn more about safely moving different types of turtles across roads or other obstructions, click on the links below.

It is illegal to take any wild turtle and keep it in captivity. It is also illegal to sell most wild turtles. Since 1975, it is illegal in the United States to sell or distribute any turtle with a carapace length (top shell) of less than 4 inches (Title 21 CFR 1240.62). The ban was brought into effect under the Public Health Services Act by the Food and Drug Administration (FDA) to address the problem of Salmonella infections in young people, espeically children.

To learn more about this issue, go to The Spruce Pets website.

We include a number of resources for your use to help you learn more about the turtles that live in Massachusetts and the organizations that help to protect them.